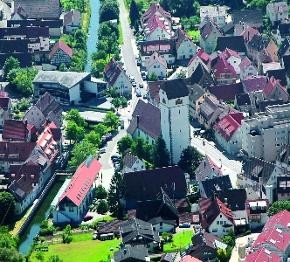 Dagerheim is part of the city district of Böblingen since Sept 1st of 1971. The village itself, which hosts in the meantime over 6,000 inhabitants was first mentioned in 1075 and has been growing historically ever since.

The market place is bordered by the Zehntscheuer (granary), which is the historical place, in which the tenth of each harvest was collected and stored in former times. It was erected around 1800 and was under restoration between 1990 and 1993 and accommodates the Bürgersaal (gathering hall). It can also be used for weddings. This building, which also hosts the public library and the local festivity hall, was awarded from the Swabian architectural board as an model example for restoration of historical buildings and modern use.

More history can be found in the protestant St. Fridolin church, which was built in the new Gothic style in 1491, before Christopher Columbus discovered America! Apart from the 36m high tower, which can be seen from a long distance, the church contains several historical highlights, such as the wooden choir stalls with many precious carvings from the 15th century or the pipe organ with a cone mechanical system from Gottlieb Weigele from 1857, which is the oldest still active organ in the region.

Dagersheim does have much to offer for you, if you decide to live here. It has a public indoor swimming pool, a full day child care for toddlers, a indoor gym, as well as attractive new housing areas.